President Hui Xu introduced the latest development of higher education in China such as “Double First-Class” construction, and new development strategy of Hohai University according to the orientation of higher education laid down by the government. He also pointed out that internationalization is of high importance to Hohai University, and suggested an all-round cooperation be carried out between the two sides. President Wells introduced the basic information of New Mexico Institute of Mining and Technology, and hoped that the two sides will cooperate in such aspects as exchanges of teachers and students, collaborative scientific research and joint school-running. And Vice President Weiya Xu gave specific recommendations: cooperation in distance education on Hydrology and Earth Sciences and cooperation in scientific research in the fields of unconventional freshwater resources, Karstic aquifer, hydrological changes based on physical model, and interaction between surface water and groundwater and its impact on environment.

In the meeting, President Hui Xu and President Wells signed Memorandum of Understanding. Relevant personnel from College of Hydrology and Water Resources, School of Earth Sciences and Engineering, Key Laboratory and International Offices attended the meeting.

New Mexico Institute of Mining and Technology, founded in 1889, is a historical public research university, mainly characterized by science and engineering, especially by mining engineering and energy. The university’s scientific research leads the world  in the fields of Hydrology, Geography, Astrophysics, Earth Sciences, Petroleum Engineering and Information Technology. 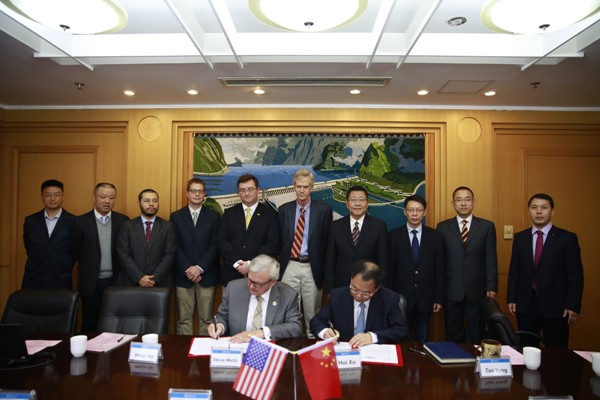